"Writing a book is the art of listening to oneself."-Brad Cameron 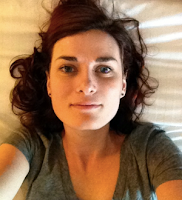 This week, I am excited to be hosting author, Ksenia Anske.  Ksenia was born in Moscow, Russia, and came to US in 1998 not knowing English, having studied architecture and not dreaming that one day she'd be writing.  SIREN SUICIDES, an urban fantasy set in Seattle, is her 1st novel.


I was invited by Brad Cameron to guest post on his blog and have been thinking about what to write, when my Beta Readers asked me to write about my obsession, errr... fascination with sirens, because this is what my 1st novel is about, SIRENS. Yes, so, let's see, where did it start? Ah, I know, with Rusalkas. I'll explain in a second. You see, if you told me about 15 years ago that I would be writing novels, more than that, that I'd be writing novels in English, I'd probably look at you like you were mad. Because back then not only did I not know any English at all (well, except "Hello" and "I love you" both of which I heard in pop songs), I didn't know how to write either, having been told since high school that my writing sucks because I have "too much imagination." I always got B's and never A's on my essays, but that didn't stop me from being fascinated with magical creatures from Russian fairy tales, a lot of which reside in the woods, and swamps, and bogs, and ponds. Especially Rusalkas. Mermaids, in English.
I can't pinpoint the exact moment when this interest in Rusalkas struck me, only the fact that when I was studying acting in my teens (yeah, I wanted to be an actress once upon a time) I spent hours in the library looking up the history of Russian theater and folklore and stumbled on so many legends involving Rusalkas that eventually I forgot all about my research and started reading more about them. Hey, what's not to like? In Slavik mythology, unlike a mermaid, a Rusalka is not simply a woman who changed into a magical being, but a woman who has died violently, before her time, or from suicide. She also had to die in or near a river or a lake, to claim it as her territory. Once her murder was avenged, however, she could die in peace. The dark angle of this myth fascinated me, especially because I've been a suicidal teenager and a runaway (I ran away from home at 16, got pregnant at 17, had my daughter at 18, you get the picture). I think since then I had an image of this unhappy girl in my mind and it touched me deeply because of my personal history which included very dark childhood with a lot of trauma of which I was not aware until my thirties, until I settled in life and became happy. 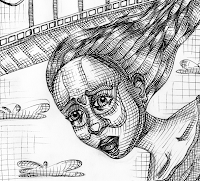 That's when Rusalkas started knocking again, from deep inside, from some hidden corners of my mind. I ignored this for a while, but the ideas kept pouring, and somehow along the way they transformed from Rusalkas to sirens because of the deeper history and acceptance of Greek mythology in America where anyone I told about Rusalkas blinked at me, but where sirens did ring a bell. To me it didn't really matter what these creatures should be called, as long as they helped me tell my story, and my story was about a girl finding her voice, as simple as that. Partly, it's my own struggle in life, partly it's the story of my main character, a teenage girl, who struggles with the same problem, to the point of wanting to take her life via suicide. It was all about the voice, the song, the scream for help. I guess the slightly violent tone of this, the "I-will-scream-in-your-face-if-you-don't-hear-me" sat better with sirens, who in Greek mythology are originating from 3 sisters with bird wings and bird voices, who lured men to their deaths in their siren meadow on an island and who threw themselves into the sea after Odysseus fooled them. They lost their wings and drowned. Maybe, maybe not. Mythology leaves us there. And that's where I pick up. I say, nope, they didn't die, they continued on living, sucking out souls from people as food, and singing, singing, singing.

There you have it. These are my sirens, and that's why I'm fascinated with them. They are a perfect blend of a bad girl and an innocent maiden, the yin and the yang in one body, beautiful and elusively ugly, sophisticated and primitive at the same time, and they are... women. Along with suicide, another underlying theme in my novel is misogyny, or hatred or dislike of women and girls, which I had to experience myself growing up and which is why I'm writing this novel, to shed the light on how it feels from the inside.

Oh, and I live in Seattle. It rains here all the time. What else to write about, if not about water creatures?
- Ksenia anske

Book One of The Zeke Proper Chronicles

Book One in the Zeke Proper Chronicles is available through CreateSpace, Amazon and many other fine book distributors. It is also available on Kindle and Nook. The amazing art work on the cover of the book was done by my son, Corey. I truly appreciate his talent. He has vision far beyond my expectations.

Book Two in the Zeke Proper Chronicles is also available through CreateSpace, Amazon, Kindle and Nook. Again, the amazing art work on the cover of the book was done by my son, Corey and just recently won an award for "The Best Book Cover in Town" through Once Upon a Time Marketing.